My sister Sarah recently posted this photo to Facebook and it reminded me of something I wrote for the Tallahassee Democrat when I was a "community columnist" during 1992. I dug up the original file and it's posted below. Seems to hold up well enough over 25 years later. ~JSC 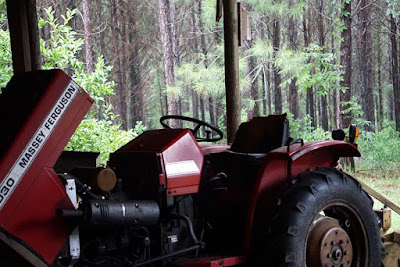 Zen and the Red-Clay Art of Tractor Maintenance

The dog had got hold of the tractor and the result was not pretty.
You'd think a chunky little mid-size Massey-Fergusen and a lean, mildly hyperactive retriever mix would be pretty evenly matched, but that tractor never had a chance.
Hinson (the dog) had gone directly for the jugular, ramming her muzzle up beneath the simple dashboard and dragging out the wiring harness to tug at it like a hyena worrying an antelope's tongue. Amazingly enough, the tractor kept running, but everything else -- lights, horn, gauges -- became tragically silent.
So there I was in a barn on an unseasonably muggy November afternoon in Recovery, Georgia, with the patient opened up and a tangle of dog-chewed wires in my hands, wondering what it is that persuades an animal to mix it up with machinery. And how those twelve volts must've tasted.
Fortunately, the wires were color-coded, so for the most part it was a matter of unwrapping the harness, taping over the bite-marks, and splicing things back together. But for a long time I just stared at the mass of disconnected, frayed ends, not knowing where to begin.
If Life's hyperactive dog has ever gotten its teeth into your wiring harness and gnawed at it some, you know just what I mean. You could just sit and stare for weeks. But after a while you start to see how some of the old connections were made, and maybe try to splice up a few. Over here, red/green goes to red/green, like so. And on this side, here's two more that go together. Clip, strip, crimp -- that easy.
Sort of like moving back to Tallahassee was for me a few years ago: at first just a tangled confusion that didn't much look like the place I'd left. Like something'd been chewing on it.
Then the connections started to appear. Family to family. Friend to friend. Like I was splicing up things that had been severed, or at least soundly gnawed, by time and distance. Clip, strip, crimp.
Within twenty minutes or so, I had nearly all the wires reconnected. Hinson watched from a safe distance, mouth open and smiling guilelessly.
Then I hit on a snag: four of the remaining wires were all the same color: red. I suddenly felt like James Bond at Fort Knox in Goldfinger. Which combination would work, and which would result in a cataclysmic tractor detonation? Here I consulted the wiring diagram, but it was no help. Only a schematic, it didn't show how the wires were actually routed. Just where they went.
What to do? You've made all the obvious connections, but you've still got loose ends -- all the lights ain't on yet. Neither your eyes nor the books tell you how to proceed. And you certainly can't put the thing back together this way.
I fell back on scientific method: eliminated the clearly wrong choices, then tried one combination. Eureka! The tail light glowed cherry red. No sparks flew. No whiffs of ozone or melting insulation. That was it -- educated guesswork and luck. Two crucial elements of tractor repair, and other things.
Only one unlinked pair remained. There was no way to test this one without reconnecting the battery and starting the engine. I pinched the ends together, reached for the ignition switch, and squeezed my eyes shut.
It was a leap of faith. In myself, in the universe, in something. Whatever. Faith, alright? Just try it, faith says, and it's OK if you need to shut your eyes while you do.

As the diesel churned to life the dog's eyes widened. I began to flip switches and scrutinize dials. Lights? OK. Gauges? Check. Horn? Beep! Hinson jumped up and bolted around the corner. Yes, dog, I smiled from the driver's seat. Your nemesis is alive and well.
Moral of story, children friends? Life's a tractor. Check the oil every now and then, keep your PTO clean, and for God's sake keep the dog out of the wiring harness.
But what gets us through isn't the happy sound of that horn or the swinging needles of any gauge.
No, not at all.
It's that moment just before you turn the key, that instant when you squeeze your eyes tight shut and your palms go a little wet. When you have absolutely no idea what will happen next.
And you reach out and turn the key anyway.