I usually get quickly bored by the partisan simplicities engendered by some of the more political posts on Inside Higher Ed, but the exchanges following Scott McLemee's thoughtful (agree with it or not) discussion of violent radicalism in Islam and the reaction thereto are well worth a close read for some reasoned arguments around one of the core problematics of our time. Yes, it will eat 30 minutes of your time--which could have been spent on something more meaningful like Colbert or shopping--but it repays the effort, methinks.

(Less rewarding but good background is McLemee's original piece and the commentary that follows it, and a special treat is one respondent's inclusion of a link to this hilarious snarkfest on Wonkette. The apology for the Bush-Caesar piece on its original website makes a nice coda, too.)

Poet Robinson Jeffers wrote the following in 1935; I read it 40 years later and thought it chilling then:

No bitterness: our ancestors did it.
They were only ignorant and hopeful, they wanted freedom but wealth too.
Their children will learn to hope for a Caesar.
Or rather--for we are not aquiline Romans but soft mixed colonists--
Some kindly Sicilian tyrant who'll keep
Poverty and Carthage off until the Romans arrive,
We are easy to manage, a gregarious people,
Full of sentiment, clever at mechanics, and we love our luxuries. 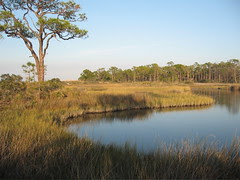 Had a gorgeous weekend at Dog Island but didn't get as much hiking in as I wanted to, due to a pesky foot injury. But I still managed to visit my favorite tidal estuary on the bay side for a little communing with the fishies. The doomed pine has met its doom, but the rest of the area looks healthy and is resplendent in fall colors.

Adding a layer of meaning to this visit were my recent studies in the Marine Environmental Issues course I'm taking this term. While I've long known much of the mechanics of barrier island movement and beach dynamics, it's always nice to learn more. For example, barrier islands are a feature of "trailing edge margins" -- the lee side of a drifting continent. That's why there are none off the west coast of the Americas.

Something new. Always a treat.

There was some rather alarming erosion on the Gulf side of the island that may have more ephemeral causes but still reminds one that the island itself is fleeting, tumbling shoreward ahead of rising seas like a ship desperately seeking port. Plentiful stumps offshore testify to where the island used to be, if we didn't have the evidence of the Co-op's own history as well.

Which just makes this scenery all the more breathtaking. See more photos. 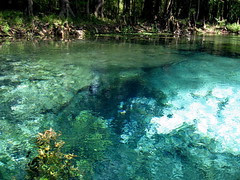 Spent Saturday with Lindsay and some of her friends paddling the Santa Fe River (I highly recommend Lars Andersen's Adventure Outpost livery, in lovely new digs on the south side of High Springs). The water has been exceptionally low, which emphasizes the color in many of the springs along the route and actually creates mini-rapids at three points on the run between US27 and FL47.

According to Joe Follman, there are over 30 1st- or 2nd-magnitude springs on the route, and that doesn't count unusual features like Big Awesome Suck, a spooky siphon I saw for the first time this trip.

I can't believe it's been several years since I made this trip. It's gorgeous, even with the crowds at Ginnie Springs. We're very lucky to have so many exceptional aquatic places & spaces within an easy day trip of home.

Laugh While You Can, Monkey Boy

I'm reminded of that line from Buckaroo Banzai every time someone snickers at the notion of a "second life" or the proliferation of acronyms applied to virtual worlds. It's so reminiscent of the reactions I used to hear from people around 1993 or 1994, regarding the "fad" called the Worldwide Web. To some extent, it's not surprising, given the cheeseball depths to which the "virtual reality" meme has sunk in the years since its early helmet-and-glove days.

But there are some pretty good reasons why I'm convinced many (more) of us will be regularly using MUVE's (multiuser virtual environments) within 5 years. I think the following quotes from an essay in TechJournal South capture the compelling nature of this "new" medium:

The whole idea of having this portal into a virtual 3D world where all of the rules of our physical plane can be removed or warped or refined completely fascinates me. It is one of the most compelling media types every created by man. The rapid growth of the video game market is living proof of the power of the medium, but I believe that we will soon see this medium subsume all other media as the best means for educating, socializing and entertaining humans.

The nice thing about interactive 3D as a medium is that it contains all other media as a subset. Sound, video, text, and animated objects and worlds are all embedded in one landscape. When you give humans the ability to add to the content of virtual worlds such as in Second Life, new behavior and opportunities will emerge.

And I think large multiplayer gaming environments will become even more immersive and compelling. We won't be watching the latest James Bond movie; we will be inside the movie, interacting with professional actors playing those movie roles that we once sat on the couch and watched passively. History students will enter the battle of Agincourt and become one of the archers. Science students will fly around inside of molecules and will walk on distant planets. The possibilities are endless.

So these will become common communication media; not only do students benefit from learning through them, they benefit from gaining experience with them. An article in MIT's Technology review captures one exciting possibility: a mashup between virtual worlds, Google Earth, and realtime data:

Remote collaboration, virtual tourism, shopping, education, training, and the like are already common on the Web, a vast resource that grows faster than we can figure out how to use it. Digital globes are gaining in fidelity, as cities are filled out with 3-D models and old satellite imagery is gradually replaced by newer high-resolution shots. And today's island virtual worlds will only get better, with more-realistic avatars and settings and stronger connections to outside reality.

Second Life (SL) is one instantiation of a MUVE that is garnering the most attention recently. The New Media Consortium's "Seriously Engaging" video on YouTube is a good overview of some of the pedagogical affordances of SL. SL Education is a growing resource on the educational uses of SL, while EduMUVE lists sites of interest to educators in SL. And Text100, a public-relations firm, has produced a compelling video showing practical business applications that one can easily map into an educational setting.

Maybe you're just now getting a handle on Web 2.0, but get ready for Web 3-D. It's already here.

P.S.: Lest you think the SL evangelists are all technophiliacs with no sense of humor, I highly recommend two satirical URLs: Get A First Life and DRAFTFCB's SL parody video (both of which are a lot funnier after you've spend some time in SL).

"Climb the mountains and get their good tidings." 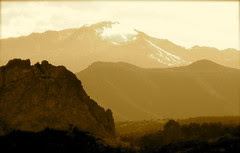 "Nature's peace will flow into you as sunshine flows into trees. The winds will blow their own freshness into you, and the storms their energy, while cares will drop off like autumn leaves."

View more images from my first trip to Colorado.

Too long to sell on a Cafe Press t-shirt, unfortunately.

Quote in a recent post from Robert Weissman at Focus on the Corporation:

"Marketing madness has overrun our society. It imposes on our time, debases our culture, poisons community ties and even relations among friends (who may duped into becoming company representatives through 'buzz marketing' arrangements) and threatens our planet with its hyper-consumerist message." 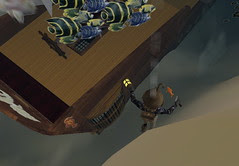 I'm gathering tools and sources for an interrogation of depictions of nature in Second Life and could get two papers out of underwater sims alone. While most of SL Under fits Cephalopodcaster Jason Robertshaw's apt "stark abyssal plain" description, others are teeming with -- well, mostly two-dimensional uploaded scans-o-fish textures scripted in eternal 3-D orbits. But there are many choice depictions and I intend to create a resource page with SLURLs of some of the more interesting ones.

Toolwise, my epistemic will be redolent with hegemonies, articulations, and possibly Spectacles (Greek inventor of eyeglasses). Given SL's powerful ability to represent "real" spaces and create realities that are carried back to RL -- an environmental-awareness activist's dream, in one sense -- it's also possible that the immersive realism of these anthropocentric creations can be read in ways that do not threaten unfettered industrialism.

(For example, count the number of polluted sims, considering the amount of development that goes on. Just like in certain cultures in RL, the costs and waste are invisible!)

You Only Live Twice? 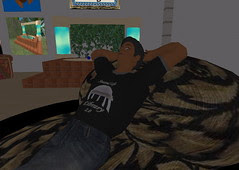 ...or so it seems. I have been having all too much fun lately in Second Life, between the silly fantasy components and the extremely pragmatic and promising elements. Imagine:

and so much more. Implications for online and distance learning are obvious, with several universities already "present" in a number of virtual locations throughout the place. Highly recommended as a way of exploring ideas and meeting interesting people from all around the globe.

Heard from my best grad-school buddy, Terrie, whose Loozian'yan and Pensacola roots nicely bracket my own Creole / Redneck-Riviera flavorings (from my days in Mobile during the Johnson-Nixon years, when I was 9-14). Anyway, Terrie reports an upcoming road trip to see her idol Jesse Winchester in Baton Rouge, which put me in mind of his song "Biloxi". Jimmy Buffett's cover really captures the feeling I remember from trips there around the Hurricane Camille era.

I once played the song -- a command performance -- to a bunch of drunk waterfront deadbeats who saw me unloading my guitar from my VW bus at the redneck marina where we often debark for Dog Island. Across the boat ramp I hear "Hey, you play that thing? Come on play us a song!" with a slight air of menace, as if I'd better damn well come over and play something for them if I had *any* balls, and that song was what came to mind as I strolled up to their rickety beer-strewn picnic table behind the bait shop. 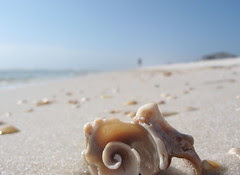 ...actually, it's barely winter, but time for Spring term to start. Teaching my first online class (and my first Comm class in too many years) and taking two: Qualitative Methods and Environmental Communication. Laura is settling into her apartment and we're prepping the guest room as an office so I don't have to leave textbooks all over the coffee table.