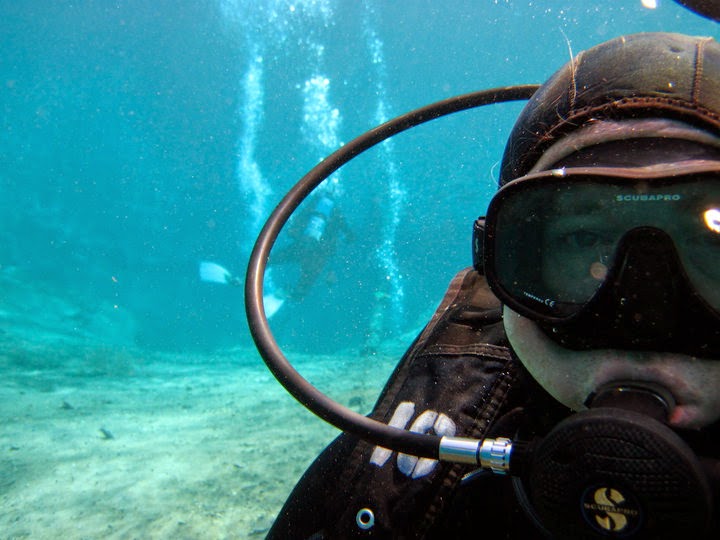 As an academic who has studied the languages of gender performance, and the other thousand ways we continually bring our various identities into being by our actions, I can’t help the wry grin on my face when I read diving magazines and online forums or stroll through a dive shop. Wow. Such masculine. So tech. Although there are plenty of adept and veteran women divers—including the amazing Rustie Stuke, who certified me off Palm Beach in 1972—both sport and professional diving are still dominated by men defining themselves through risk, fitness, scientism, authority, and other ways we People Of The Penis have tended to go about things. (I’ve just given myself an idea for a paper….)

So today as I’m pre-checking my gear for a planned dive tomorrow with my brother Paul in Panama City, I’m smirking at myself—but also loving it. ALL the technologies. The evoked memories of past underwater adventures. The officialdom of certification cards and the smell of black neoprene rubber, creaking as I load it into the gear bag. The whoosh of a regulator and the heft and clink of weights. 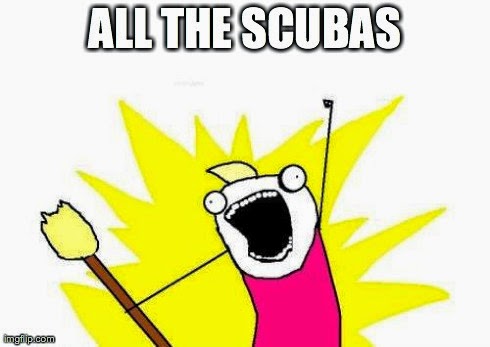 Timewise, there are clear points at which I will break the plane of the water’s surface, transitioning between a world my body was built for and another that can’t sustain it without infusions of technology and, by implication, money. Even the deep meditative insights of Pranayama (for what else is the breath-awareness that divers practice?) don’t erase this material, physiological presence unda da sea, as well as the criticality of being totally present in the moment.

But I am realizing that prepping for a dive extends that dive backwards in time, just as the photographs we will take tomorrow stretch the experience long past our no-decompression limits or air supply. The Dive begins and ends, but putting my life-sustaining toys together before a dive reminds me that in many ways, to use a post-structuralist catchphrase, I am always already there. And that all those past dives are still in me, like extra nitrogen that never quite dissipated.


Tonight's entertainment was a meditation on torque and inclined planes, redolent with old grease and new rubber. A tightening of many fasteners, mostly 13mm, 14mm, 17mm, and 19mm but including couple of 10's and one big honker over 20mm. Shifting, aligning, testing, and then threading cotter pins and bending lock plates. I am thoroughly glad I don't have a deadline for this job but I also, as almost always, find myself awash in the physics, the engineering, the history whenever I'm fiddling with an old VW.

This one is almost 50 years old with a design that was venerable even when the car was new; a quirky little People's Car with an odd rear-engine, aircooled, relatively low-powered drivetrain and a pedigree from the darkest depths of pre-WWII Germany. Mine dates from the VW glory days of the early-mid 1960s, when the cars were something of a fad and were still incredibly simple relative to what came even as early as 1968, when Federal regulations and plastic dashboards destroyed the world as we know it.

The steering has been wearing out, so I decided to replace the steering gear and--since getting to it requires removing the gas tank--tidying up some odds and ends while I was in there. You can see the parts I've been working on at the bottom of the VW Front Suspension and Steering diagram below: the black hockey puck with the steering column and turn signal towards the right and a steering gearbox to the left.

What's not apparent in the diagram is that this assembly involves 2 screws and 12 nuts and bolts, and runs through a firewall and around an axle, making it complicated to monkey with different parts of it at the same time.

Below is an image from the classic "Idiot's Guide" that shows the VW suspension and steering from directly overhead, with the body off. The steering box takes the circular twisting motion coming from the steering column when you turn the wheel and through internal gears bends this motion 90 degrees so the twisting is vertical (like on an old VW bus). There's a shaft coming out the bottom of the steering box, turning back and forth whenever you steer. A lever is clamped to this shaft so that its end moves back and forth as the shaft twists; the lever is called a steering or pitman arm (I was fascinated to learn the source of this term, since an ancestor of mine ran a sawmill).  The end of the pitman arm is connected to rods that tie it to the backs of the wheels -- the rods are called tie rods -- and they push or pull the wheels simultaneously to turn the car left or right.

It all has to work in a tight space with strong connections and safeguards against things loosening up, for obvious reasons. Each component does its job and only its job, and is engineered using whatever knowledge of metallurgy and manufacturing was available at the time. The conversion of rotational to linear motion is as basic as pedaling a bicycle and is at the heart of machinery and the industrial revolution. This particular VW steering mechanism design originated in Ferdinand Porsche's shop in the 1930s, and was forged, milled, cast, threaded, stamped, and assembled by German autoworkers not far from the border with East Germany during the Cold War. I sometimes think a machine is a kind of message from its designers and builders; one that even an amateur mechanic like me participates in when trying to effect some repair or adjustment. "Why did you make this nut so hard to reach?" I frequently ask these ghosts. "How did you end up with this design instead of another?" At times I call down a curse on their houses or disparage their mothers when the wrench slips and my hand is bleeding, or a corroded old bolt made of unobtanium twists off.

You can think me mad for muttering at long-dead German industrialists in my garage, but first I recommend reading that aforementioned Idiot's Guide, formally known as How To Keep Your Volkswagen Alive: A Manual of Step by Step Procedures for the Compleat Idiot. Get the spiral-bound, Courier-hand-typed early version if you can. I'm not going to tell you anything more about it other than that you can't call yourself conversant with 1960's Zen Industrial Culture until you've studied it and its highly detailed underground comix-style illustrations. (Note that I don't even hyperlink it for you. It's that kind of credential, my friend.) 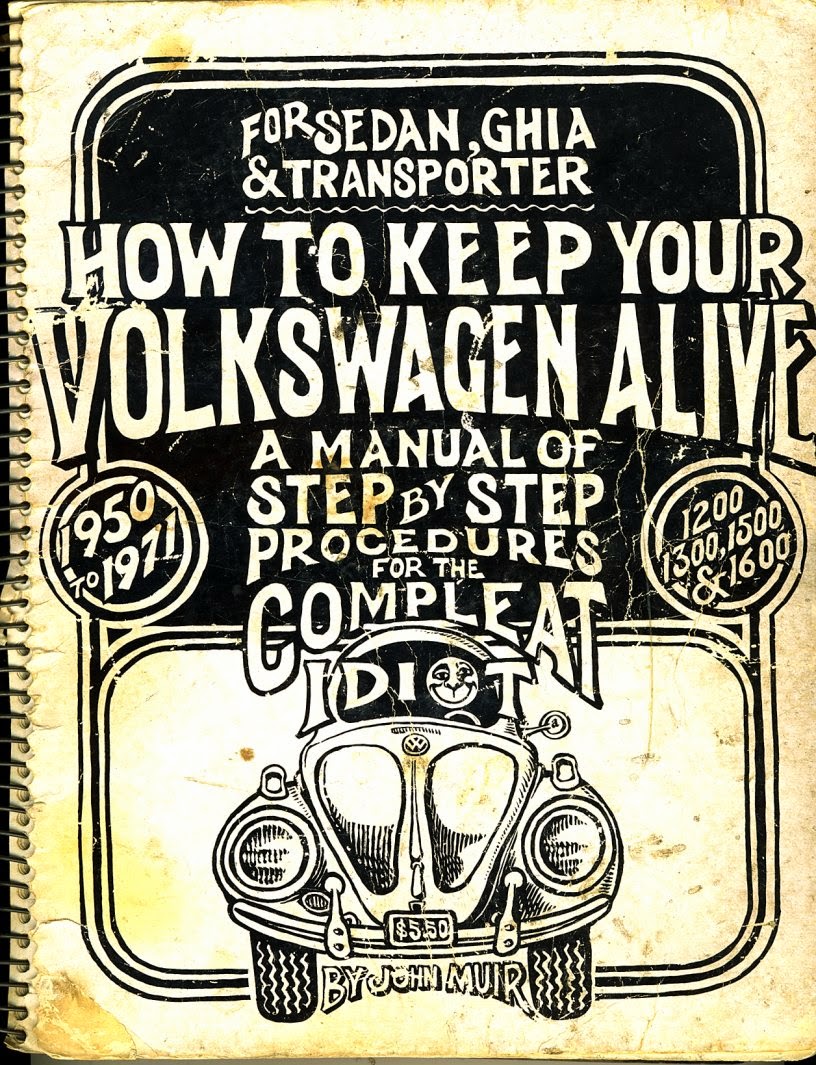 But we were talking about the design and refurbishing of old VW steering mechanisms. On these cars, the steering column does double duty as the current path for the horn circuit, via a clever arrangement that answers the engineering question, How *do* you get electricity to a horn button on a freely turning steering wheel? Part of the answer is in the offwhite wire below, transferring current across the rubber steering coupler or "puck." (The rest of the answer is actually "You don't," because this design puts the horn-button switch on the ground side of the horn, but that's another conversation.) 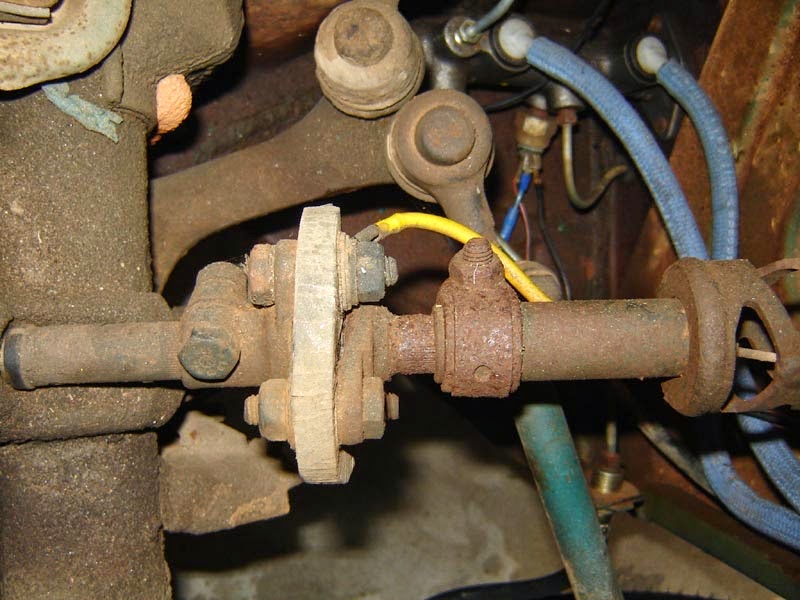 That rubber puck is also visible at right in the image below: 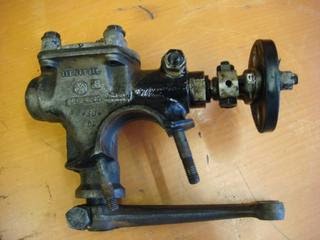 At any rate, it's mostly reassembled at this point, and I'm about ready to reinstall the gas tank, button up loose ends, and see if it helped. There is definitely MUCH less play in the steering, and while this will make afternoon drives less dramatic, it should make them more predictable.