Life is but a Dream 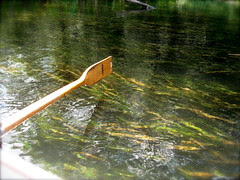 This is something I don't do nearly often enough: dip a paddle in an eelgrass-filled spring run.

Or in this case a sho-nuff oar, two of which can scut little Wasabi Maru, my wee Larson (1957 "Game Warden" model) around like a water beetle when I want silent propulsion over the luxury of an outboard.

Sunday afternoon Nancy and I took the boat out for the first time in well over a year and it (and we, rusty dockhands) performed well among the weeds and weekend warriors of the mighty Wakulla* River.

I could watch the undulations of these broad green-brown ribbons forever.

Ah but the poor river (and headspring) is so obviously over-nitrated that it's sometimes hard to take. Gorgeous, yes, but not what it was. And to what meaningful end?

Meanwhile, dip the oars and lean back into them, listening to their creak and splash and the keening of fishing ospreys from the cypress along the banks, and let your thoughts follow the schools of mullet as they circle past the lumbering dirigibles of scarified manatees. There is only this.

*Despite the common "mysterious waters" tourist-trade translation of this word, the only thing mysterious is its original meaning. It is a Creek mispronunciation of a Spanish word, Guacara, which was likely itself a corrupted Timucuan word. In fact, the Spanish mission of San Juan de Guacara, well to the east, may be the origin of another Florida river's name: Suwanee. 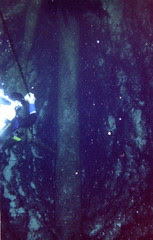 I did not know this young Austin poet who died after a diving accident in one of the most beautiful places I know: Devil's Ear Spring in the Santa Fe River. In reading more about the accident I discovered a poem of hers:

Underwater, four hundred feet back
into the earth's graveyard
we turned off our lights and hung
in perfect blackness
swallowed up by the dark stone
the devil's gullet
the catacombs of the reckless

I have never been so happy than surrounded
by crushing depths and old memories
except that first night
when I lay next to you, your hand
across my shoulderblade my lips
in the hollow of your throat
you are that quiet resignation
that joy of nothingness, as close
as I can ever get to peace
as close as I would ever want

give me four hundred feet inside you
the blackness under your skin
and I will rest in you forever
the marrow in your bones is pockmarked with caves
and I have time.

Years ago I wrote something similar (not nearly as good: "Sink Whole" on this page) and so I doubly mourn the passing of a kindred spirit. A very sad story indeed.