It looks like I won't need to replace the generator, which is good, because it's a pain in the ass on an aircooled VW.

That's because the generator and cooling fan are on the same shaft, powered by the engine's single fan belt. The cooling fan is inside the fan shroud, the large black metal housing on the far side of the engine in this photo: 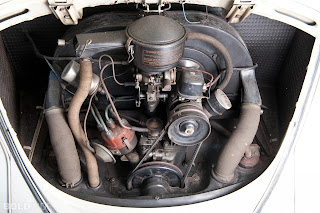 That's why one of the VW Beetle's two idiot lights -- the red one, no label -- signifies either lack of charging or lack of cooling or both. If the fan belt is intact, it's unlikely to be a cooling problem. But if the generator is hosed, you have to remove the fan shroud to get it out, and given the tight confines of the VW engine compartment, it's a pain in the ass. It has to lift straight up, and as you can see in the above pic, the decklid ("hood") and hinges are right there above it.

I had the red-light-on problem and it wasn't the fan belt, which means either the generator or voltage regulator (box on top of it) were faulty. Reading up on the various tests (I recommend this resource or this one, though the procedures in Muir and even Clymer are adequate*), I decided to try polarizing the generator, since the car had been sitting for several years.

You're supposed to do this when installing new generators, too, but I never have. I've replaced a half dozen or so over the years. I was just lucky they had some residual polarity from factory testing, I guess. It's an amazingly simple procedure that invokes the mysteries of electromechanical engineering: take a device that is normally spun to produce electricity, give it some electricity, and it spins like an electric motor (you have to remove the fan belt so it's free to turn). That "seeds" the generator so it can do its thing. And if it doesn't spin, that's a sign that the generator is faulty.

Took a few minutes to get that big nut off the generator pulley, which requires a potentially knuckle-busting application of socket and screwdriver, thus: 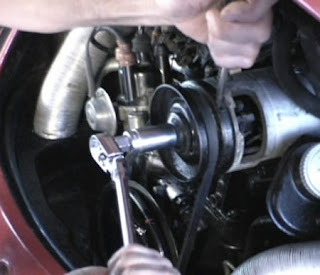 As usual, judicious application of PB Blaster, a few taps of the hammer, and a cheater bar were persuasive.

I then hooked up my jumper wires per procedure and the generator began to spin! So I buttoned it all up and fired up the engine -- not really expecting something so simple to do the trick -- et voila! Red light off!

On to the next item on the list: turn signals and horn.
____

*of course, I also have Bentley and Haynes. I'm pretty well manualed up.

Once around the block, Jeeves.

I took the '65 Beetle sedan for a short shakedown, just a little jaunt around the neighborhood. A few odd groans and noises from the back that are most likely related to being inert for four years. Otherwise, runs fine with plenty of power, brakes are strong, shifts easily.

This was my first time behind the wheel of a VW sedan in decades. Yes, I was grinning. Here I am on the hood of my first one, circa 1973-74: 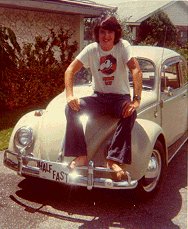 Haven't had a lot of time to work on the sedan lately but have been amassing a few needed items so I can make good progress if it ever stops raining, literally and figuratively.

The turn signal doesn't flash. Perhaps it's just a weak battery -- see bottom. But I still have a small stash of six volt parts and might be able to get one of these to work: 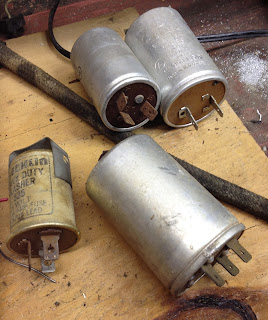 I also went ahead and ordered a new one because it was cheap. Picked up some new 6V stop/tail bulbs, a replacement sunvisor clip, and interior light -- the latter two from one of my favorite vintage sources, Wolfsburg West. The interior light looks sharp. A very nice repro. 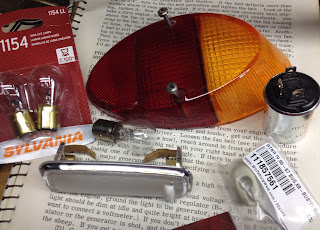 The taillight lens is not new. Well, not original, either. It's a Eurostyle (amber top) lens the PO picked up at some point. I assume the original solid red lenses cracked or faded. Eurostyle lenses were trendy a while back and I have some on the convertible. It's on the pile because I scrounged a decent mounting screw from my parts bin to replace the corroded original.

The two big-ticket items were a new windshield gasket (not pictured), and this item, my first non-lead-acid car battery: 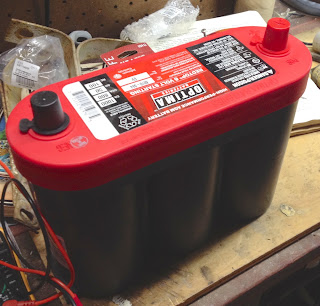 Although it looks nothing like the original black block, it's well-regarded as an upgrade if you have a 6V system that is even remotely marginal. Not much more expensive than an original style, either, which are made these days from hen's teeth and unobtanium. Given the radically different form factor, I'll have to rig a way to secure it. Fortunately, you can mount these AGM batteries in any position -- even upside down! Wonders of modern science.

So there you have it. Time permitting, these go in this weekend.
Posted by JS Clark at 00:28 No comments: