I've blogged about diving before, and even wrote a poem about it, but had almost forgotten about this first essay of mine on the subject, written when I was a Tallahassee Democrat "community columnist" in 1992. My mind's eye was mostly recalling a spookily grand dive in Emerald Sink, south of town. I don't think I could do a better job of evoking the experience today. The photos are from freshwater dives since 2012 or so, featuring my brother Paul and his son Liam.

Sinkhole Diving's Not In Living Color

South of Tallahassee there are portholes into a universe of water that extends for horizontal miles under the piney woods, beneath A.M.E. churches and convenience stores, in some places swooping hundreds of feet underground and in others just under the sandy surface, below a thin ceiling of limestone. On summer nights when the crickets and cicadas pause to change sheet music it moves with an empty, gurgly sound that makes dogs whine and scratch at the floors of house-trailers.
I am not a daring man. I'm no athlete, no great outdoorsperson. I drive a very slow car. Heights frighten me. Darkness makes me whistle. And yet I am drawn here, to these sea-haunted mansions. . . .
On many an occasion I can be found in the company of like-minded individuals, staring into a sinkhole that rests like a blue-green gem among the live oaks. Our eyes follow the white limestone walls that curve outward underwater, a gigantic brandy snifter, into emerald depths. There are no shallows in most sinkholes. Two feet from shore the bottom may be a hundred feet down. Yet even then, it is sometimes visible from the surface.
I and my like-minded friends shrug ourselves into scuba backpacks, check straps, and open air valves. Black-clad, tentacled with hoses for pressure gauges and extra mouthpieces, hissing like bipedal locomotives stirring from some fantastic train-yard, we approach the water with the heavy creak of neoprene rubber and the dull clank of weight-belts against air tanks. One part Darth Vader, one part Alien, and three parts stuffed sausage. We move with care, for we are as unnaturally leaden and labored as beached whales.
But once in the water, all that changes. We bob at the surface for a few moments, pulling on fins and hawking into facemasks. Then, with an aggregate sigh from the exhaust valves of buoyancy-compensation vests, we leave the world of air behind. 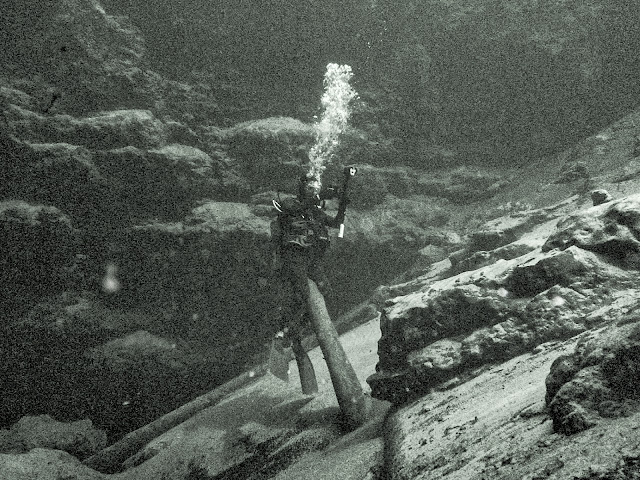 As we descend, bottom features emerge from the bluish haze below like returning memories, and each time I drift downward I recall anew that dreams of flying are, in fact, dreams of swimming. Memories of swimming. Recollections of flotations past: a few months in the womb and then, further back, through countless eons of seaborne ancestry.
And so quickly it returns: in the element of water you can rise and sink merely through attentive breathing. You move about in the endless pause of a sinkhole's depths with leg-kicks as nebulous as those of sleeping dogs, turning and banking with the lightest of gestures. As though you might think yourself from place to place.
But you can't really go back to the ancestral home again. There is the constant need to monitor your depth and air supply. Speech is impossible; communication primitive. A careless flipper-stroke can stir up enough moondust silt to reduce visibility from hundreds of feet to mere inches. You are indeed an alien here, kept alive by wits and machinery. A tolerated tourist. A furtive worshipper.
The beam of your flashlight, swallowed by the airplane-hangar entrance to a side cavern, reveals nothing but a grainy darkness through which motes of debris move like dislodged stars. Thigh-sized catfish gape in perpetual surprise from rock ledges. Sound comes from everywhere at once: the regular hiss-and-bubble of your breathing; clouds of exhaled air rumbling toward the surface; moody, far-off hums and sighs and feathery whispers. 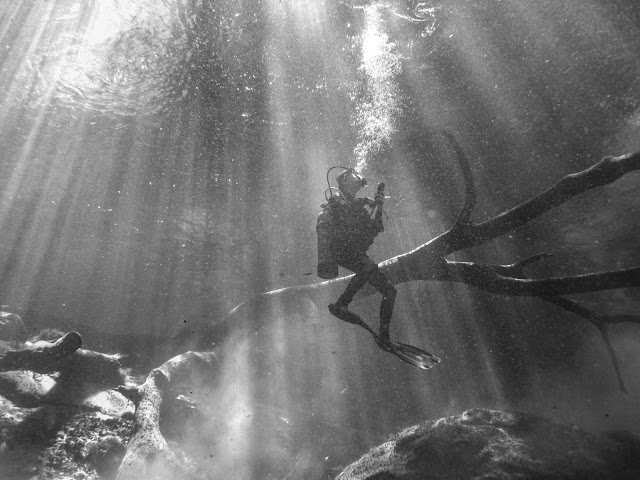 Your eyes take in riots of monochrome: white limestone dappled in welcome sunlight, black tree-trunks like the charred beams of a burned-out cathedral, and gray silt that blankets everything like entropy made tangible, like lurking death, above which your exhaust bubbles trail in plumes of metallic smoke toward a circle of leaves and sky overhead--a blue-green heaven above a charred world.
What business is this of yours? you must ask yourself. What miracle or madness has placed you here? Why doesn't your heart stop when you crouch sixty feet down in a rock-lined tube no bigger than the interior of a Toyota, watching your spent air bubbles cascade up the sloping roof like mercury? How will you bear to walk the land again, to feel gravity again, when you have flown, a mechanical manta, across a hall the size of a drowned sports arena?
Sometimes, at great depths, I remove the mouthpiece of my regulator and scream with terror and delight and superstitious awe, but there is only the sound of bubbles. Sometimes, back at the surface, I inflate my BC, lean back, and bob like a great, rubber otter, drinking in the sunshine and air as if for the first time, yet already planning my next return to the ashy depths. Sometimes I wonder if it is life or death that draws people into the drowned caverns.
Yet diving the haunted rooms of the aquifer's domain eases something within me. It generates relativity; reminds me of things I should remember. Gives me back my fins, if only for a half-hour or so at a time, and permits me to worship the One True, firsthand.

Joe Clark, who has begun to notice little gill-like structures forming on his neck, is a Writer/Editor for FSU.