Also sprach 10cc, circa 1974. That white-boy reggae song's been running t'rough my head since reading Annamarie Jagose's Queer Theory: An Introduction for class last week. Yes, I'm a little late on the scene since QT has been around for a decade or so, but that's queer too.

I'd heard the term but (predictably) had no idea of its applicability far beyond the politics of sexual identity. It speaks to my ambivalence towards some aspects of "masculine" identity and yet so much more. Depending on the context, I've been queered as the Hippie or the Brain. You know what I mean. The Queer. The Other. People are strange, when you're a Stranger. Sometimes, it's identifying myself as Southern and hating both the smug, regionalist bigots and the ones whose behaviors continually provide ammunition for them. I'm Queerly Southern. To be a Floridian is to be Queer, unless you compartmentalize your identity on one side or the other of I-4 as many do.

Queer Theory queers categories and identities. Not with the aim of destroying them but to illuminate their construction and open up spaces for change.

(Did I hear you say everything's just dandy?)

We tend to reify, to make binaries, and to assume essentials when it's all maya, construction, convention, performance and reproduction. Queering -- I think the verb works better than the adjective -- even queers identity itself. Are you what you think? What is constant - your molecules, your memories, your values, your cognitions?

All this has obvious application to the queered reality of virtual worlds, with their constructed personas, violations of what our eyes tell us is possible, and the way virtual realities queer the "real" reality. 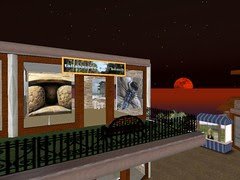 I've rented a "store" in the Second Life Etopia Prime sim - a frequent hangout - and am hanging my photos on the walls. I'm not yet sure what I will do to it, but one idea is to use it as a jumping off point for regional cultural and natural things. It's called Tallahassee Beach, of course: Etopia Prime 160,43,36.